It’s 6AM, the best time to think and write. I’m sitting in a portable camp chair with a cup of coffee, a notebook, and a pen. My partner is still asleep. My youngest daughter is in Wyoming on a NOLS trip. The pond’s placid surface reflects the blanket of clouds smothering this section of the Adirondacks, save for a dark green strip shoreline to the west. Ultimately the sky is responsible for color. She has phoned it in this morning.

Max has nearly recovered from yesterday’s folly. He had vomited near the water’s edge that afternoon. Nothing dramatic. He sniffed at it, considered a second try, then wandered away like a teenager leaving the dinner table. His food went untouched that evening. Normally, he would bury it with his nose, then pick at it an hour later, ingesting more dirt than kibble. He lay by the fire, motionless, ignoring the forest’s many temptations. My partner sniffed the air and made a face. Nothing on our shoes. We grew worried about the dog. He was 12 years old, lumpy and arthritic, but never so inert. Was he dying? What had he eaten? In the faint light cast by the fire, I found it, still moist, an object the size and consistency of a candy bar, coated in pine needles. Max had eaten human shit.

I admit to internet withdrawal. I’m a web designer. There is no shame in this, nor is there much meaning to the medium. The web is ultimately infrastructure, a physical shortcut to an infinite collection of people, images, truth, lies, and advertising. In the 21st century war of ideas, it is a battleground made of cables, electricity, routers, and servers. Without it, the world mostly shrinks to the horizon, to the distance sound can travel. Suffering that dearth, our thoughts return to normal. We ponder our place in the natural world. We might even wonder why dogs recycle feces.

Granted, there’s a bit of sustenance mixed in with the harmful bacteria, and even a bit of information. Outdoors, Max cannot walk in a straight line. He is a prisoner to the scent of urine. It must be like reading a newspaper. Who can deny this quest for knowledge? Someone who needs to be at work in half an hour, but let’s find the good in this, shall we? Max is a scavenger and that is why dogs and humans get along so well–we get companionship, they get fed. But next time you do number 2 in the woods, please use a trowel.

When you don’t have a newspaper or an internet connection and you are deep in the Adirondacks, you can find information in the bottom of sinuous creek connecting two ponds, noting how the underwater vegetation sways without sound. You might notice a languid heron’s curved neck compress before it alights. Those long wings are powerful enough to ripple the water, to make sound from still air. Instead of browsing, you are simply watching, smelling, and listening.

No wonder that a recent poll found that once the Covid-19 is contained, 85% of people surveyed do not a faithful return to the status quo. Life has slowed down and most of us prefer it that way. We want a break from hyper-productivity. This trip has deepened my appreciation of the natural world. It is neither sentimental nor dishonest. It is an old friend that doesn’t require small talk. But you must slow down to understand it. 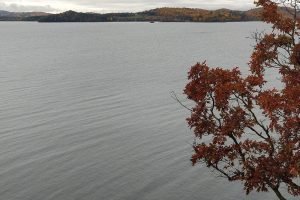 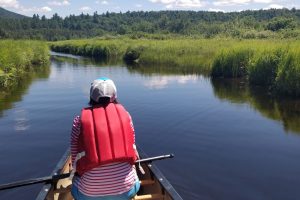